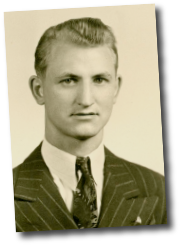 Edward “Pete” Peterson was born November 16th, 1917, spending his early years in Loveland and Berthoud, Colorado, until his family moved to Denver. He attended school at Stevens Elementary and Morey Junior High School.

In 1931, the family moved to South Sherman Street in Englewood, where he completed junior and senior high school, graduating from Englewood High School in 1935. In high school, he excelled in academics and athletics. He was a guard and end on the football team, and was also on the track team. He was ranked number five academically in his graduating class.

Pete attained the rank of Eagle Scout in the Boy Scouts, and he was responsible for the founding of the Englewood Chapter of the Order of DeMolay. Known today as DeMolay International, this organization is dedicated to preparing young men to lead successful, happy, and productive lives. He was also a member of the Englewood Masonic Lodge.

At this time, Pete became actively interested in aviation. He enrolled in the Civilian Pilot Training (CPT) program at the Walt Higley Flying School. The CPT was a program sponsored by then US President Franklin Roosevelt to build up a pool of potential military pilots should the US enter World War II, which had been raging in Europe since 1939. Flying became an all-consuming part of Ed Peterson’s life during this period.

Pete met his future wife, Ruth Wallrich, while in the CPT program. Ruth, a native of Alamosa, Colorado, was a licensed pilot. They shared a love of flying, athletics, and the outdoors. 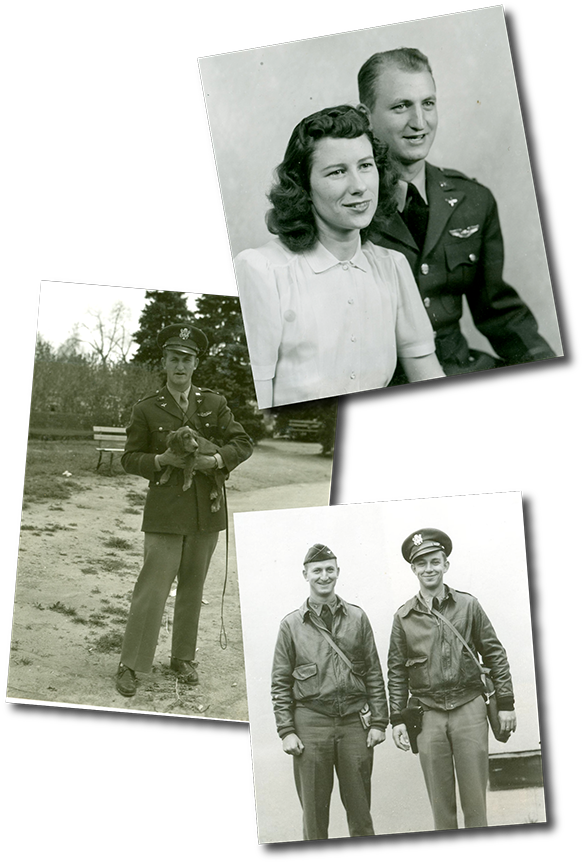 After Pete enlisted in the Army’s Aviation Cadet program, he was ordered to report for basic military flight training in March 1941. But first, he and Ruth married on March 17th in Alamosa. He then left for Stockton Field, California and his initial assignment.

Upon completing flight training on October 31, 1941, Ed was commissioned a 2nd Lieutenant in the Army Air Forces. He was quickly promoted to 1st Lieutenant in February 1942 and assigned to the 12th Photographic Reconnaissance Squadron at Colorado Springs Army Air Base in June 1942. He later became the Operations Officer for the 14th Photographic Reconnaissance Squadron in July 1942.

Pete was also the squadron’s test pilot. On Saturday, August 8th, 1942, he was taking off on a routine aircraft test flight following an engine change. Just lifting off the runway, the left engine of his Lockheed P-38 “Lightning” failed and he crashed at 11:30 AM. Upon impact, the aircraft burst into flames. He was rescued from the aircraft by a three-man base crash rescue crew, each of them risking their lives pulling Pete out of the burning wreck. Taken to Glockner (now Penrose) Hospital, he suffered extensive burns on his head, chest, and lower body. As he faded in and out of consciousness, he continually asked those around him if he would be able to fly again. He died at 3:00 PM that afternoon.

At Ruth’s request, his remains were cremated and scattered over Pikes Peak, Denver and Alamosa from an F-4. Ruth and Pete’s daughter, named Vicki Lee, was born five months after his death.

Perhaps the best way to summarize Lieutenant Peterson’s sacrifice for his nation comes from the words on a certificate presented to his family and signed by President Roosevelt; “He stands in the unbroken line of patriots who have dared to die, so that freedom might live. And grow. And increase its blessings. Freedom lives. And through it, he lives.” 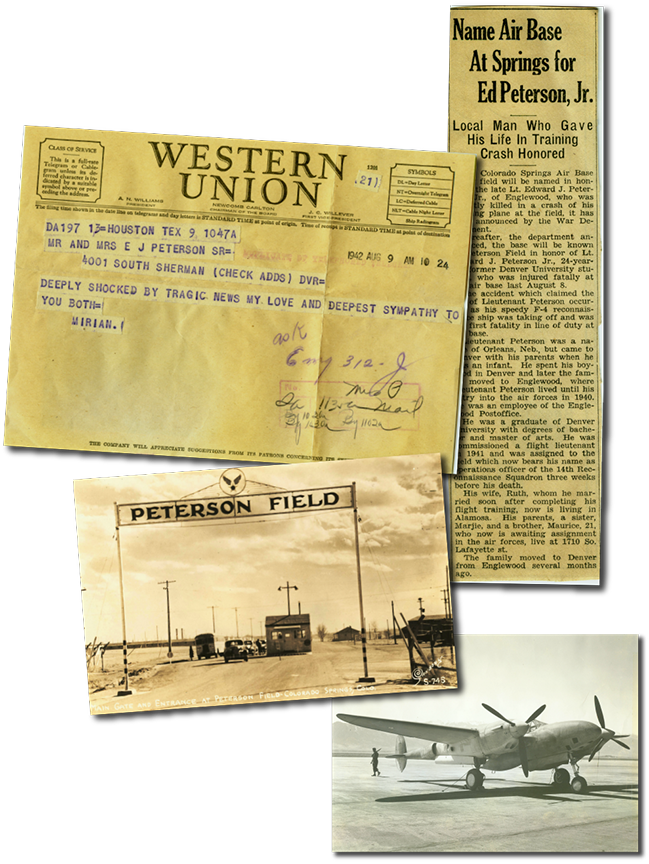 On behalf of our Board and those of our members who were able to participate in the field trip to PAFB, I wish to thank you and your volunteers for an extraordinary morning. Despite the cold and rainy weather, we were treated to the warmest hospitality—even the use of umbrellas! We greatly enjoyed our “walk through history” of the aviation and Air Force story that is so vital to this area. Yet another treat was meeting Ginger, another contextual dimension to the “living history” theme.

Our group visited the museum, unannounced, and were welcomed and offered an extremely interesting and comprehensive tour of the facility. Your volunteer tour guide was specially competent and extremely knowledgeable about all facets of the Air Force. Someone in our group commented that he had an “encyclopedic mind.

HELP US CONTINUE OUR MISSION